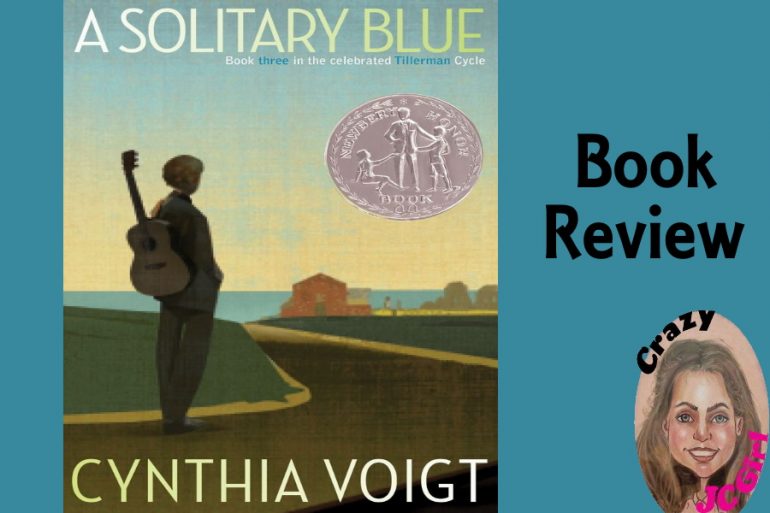 One of my favorite books I read this past school year is A Solitary Blue by Cynthia Voigt.

When Jeff is left with his stone-faced father, who is a professor, he is left to raise himself. He has next to no friends, and he shares a strained relationship with his father. In sixth grade, Melody, his artistic mother, reenters his life. At first, he is overjoyed that she is back, willing to pardon her flaws. He bonds with her, and writes her a letter each month, but she doesn’t write back. Jeff even sends her a beautiful scarf for Christmas, getting nothing in return. He excuses her for this, saying that she is too busy doing important work.

From the back cover: “Jeff Greene was only seven when Melody, his mother, left him with his reserved, undemonstrative father, the Professor. So when she reenters his life years later with an invitation to spend the summer with her in Charleston, Jeff is captivated by her free spirit and warmth, and he eagerly looks forward to returning for another visit the following year.”

“But Jeff’s second summer in Charleston ends with a devastating betrayal, and he returns to his father wounded almost beyond bearing. But out of Jeff’s pain grows a deepening awareness of the unexpected and complicated ways of love and loss and of family and friendship — and the strength to understand his father, his mother, and especially himself.“

After one summer’s visit, Jeff returns frustrated, because Melody spent absolutely no time with him, instead spending time with her boyfriend. While waiting for his mother, he buys a boat, learns how to control it, and sails to an island where he finds a lone blue heron.

In eighth grade, when his father, Horace, discovers that he has been skipping school to visit a nearby carnival ride, he decides to move to a secluded cabin forcing Jeff to attend a new school. Repeating eighth grade at his new school, Jeff’s life seems to be getting better since he has made two good friends, Phil and Andy.

Taking an interest in schoolwork now, Jeff also learns how to play the guitar, which changes the relationship he shares with his father. Jeff meets Mina Smiths, and befriends the Tillerman family: Dicey, Sammy, Maybeth, and James.

As Jeff finally forms an almost familial connection with the Tillermans and his father, Melody abruptly returns to his life. Jeff realizes that he never needed her love in order to be happy.

I think that this book is great for 4th-grade & up as a Read Aloud, but I think it could be a reader for those in 7th grade and higher. Warning – there is some cussing in the book.

I used this book as literature pick for Language Arts while studying American History in high school.

In fact, I used this book, along with the Before We Were Yours book (by Lisa Wingate), in a writing assignment comparing biological vs. step/adoptive parents along the theme of nature vs. nurture. Actually we took it a step further and used these books along with The Other Wes Moore book (by Wes Moore) to write another paper on parents & environmental factors and their affects on one’s life and behavior.