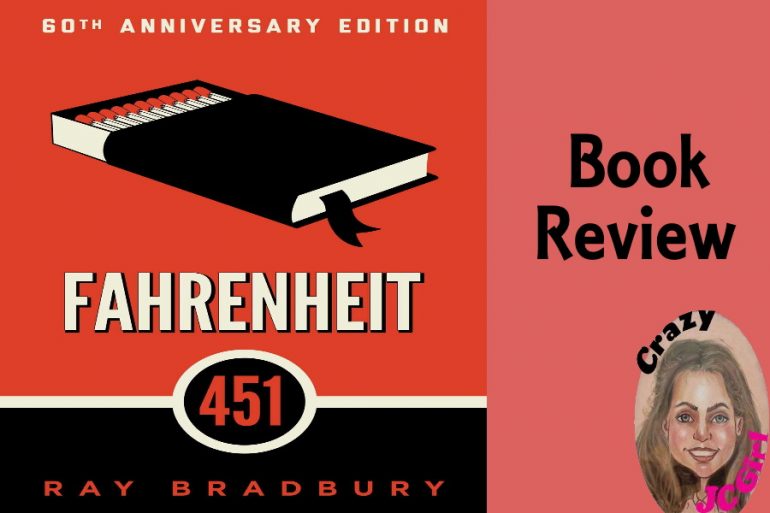 Recently, I finished reading Fahrenheit 451 by Ray Bradbury. This dystopian novel is considered an American classic.

Set in the future where the government has complete control over society, fireman Guy Montag starts fires instead of putting them out.

From the book jacket: “Guy Montag is a fireman. In his world, where television rules and literature is on the brink of extinction, firemen start fires rather than put them out. His job is to destroy the most illegal of commodities, the printed book, along with the houses in which they are hidden.”

“Montag never questions the destruction and ruin his actions produce, returning each day to his bland life and wife, Mildred, who spends all day with their television “family.” But then he meets an eccentric young neighbor, Clarisse, who introduces him to a past where people didn’t live in fear and to a present where one sees the world through the ideas in books instead of the mindless chatter of television.“

“When Mildred attempts suicide and Clarisse suddenly disappears, Montag begins to question everything he has ever known. He starts hiding books in his home, and when his pilfering is discovered, the fireman has to run for his life.”

Montag and his fellow fireman are hired to set books on fire. Current modern day firemen use hoses that spurt water, but in the future hoses flow with gasoline. Books, once valued as a main source of knowledge and entertainment, are now wholly repudiated for the opportunities they bring and the truths they hold.

After being a fireman for 10 years, Montag meets Clarisse McClellan, a 17-year-old whose radical ideas are subpar to the government’s standards. In a world full of speeding cars and tempting ads, Clarisse walks her own unique path, looking at the world and observing things the average man doesn’t notice.

When Clarisse helps Montag awaken to the faults of the government, he is not at all eager to hear her reasoning. But once she dies when hit by a speeding car, everything starts to change about Montag’s beliefs. Now that he realizes the corruption in which he was so blindly involved, he enlists the help of fellow “readers” – those who are trained to memorize books. (I made up the term “readers”) Those close to Montag end up reporting him to the government, making him a wanted man. A statewide manhunt is held, and Montag escapes every trick the police have – even a robotic dog. He escapes to the countryside where he meets with the other “readers.”

I love this quote I found while researching this novel:

“You don’t have to burn books to destroy a culture. Just get people to stop reading them.” – Ray Bradbury, 1972

I really enjoyed this book, if no other reason, than to prove that those in authority shouldn’t always be trusted. If you don’t need to read this for high school, I would say it also makes a great Summer Read.

I believe this book is suited for 9th grade and older. This book contains several cusswords.

I used this book as a literature pick for Language Arts while studying American History in high school.

This book is full of allusions, symbolism, and themes on happiness, fulfillment, censorship, freedom, etc. It is an excellent choice for a literary analysis writing assignment.