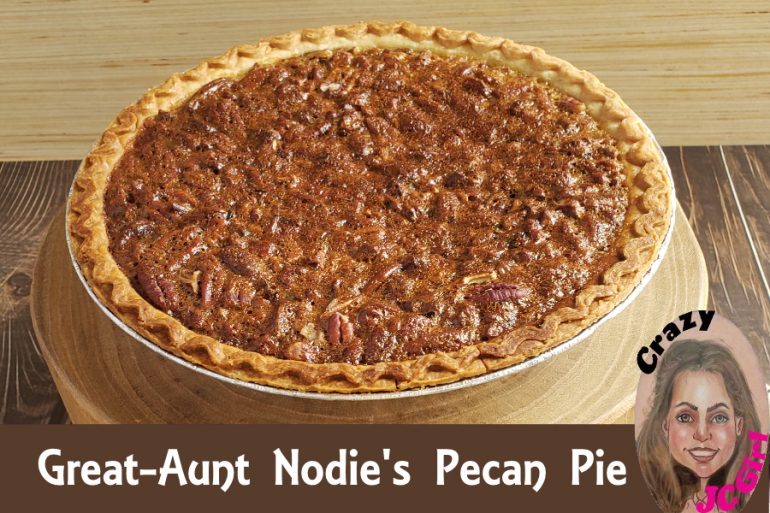 My Great-Great-Aunt Nodie was known for her pecan pies. In fact, she made all the pecan pies for the old Stuckey’s near Carson, Virginia back in the 1960s. Although she passed away in 1973, her recipe has been handed down and still continues to make appearances at Thanksgiving and Christmas get-togethers.

Her recipe instructs you to boil the butter, sugar, & Karo syrup in a saucepan on the stovetop first. I’ve read that the secret to a good pecan pie is to brown the butter first. I think using the saucepan method also helps to ensure the sugar is fully dissolved too.

If you don’t use the saucepan method, you will simply have to cook the pie longer in the oven. Which means less dishes & pans you need to wash afterwards. But you really miss the buttery-richness this extra step provides.

I ran into an issue the first time I made this pie. The recipe didn’t state what size pie shell and I used the smaller Traditional 9″ pie crust. The filling overflowed!

So, you will definitely want to use a Deep Dish 9″ Pie Crust.

FYI: We also noticed that our ceramic & glass pie pans are actually much bigger than the store-bought shells. In fact, we got out the measuring tape. Although, these pie crusts state that they are 9-inches on the packaging, when we measured they are only 8-inches in diameter from inner-rim to inner-rim. (They did measure 9-inches from outer-rim to outer-rim.)

Great-Aunt Nodie’s recipe calls for 1 cup of Karo syrup. The problem is, she did not specify whether to use the Light Karo syrup (red label) or the Dark Karo syrup (blue label).

I’ve tried both & learned that the Light Karo syrup is much sweeter overall than the Dark Karo syrup.

When using 1 cup of Light Karo, I only needed a 1/2 cup white granulated sugar to obtain a sweet sugar mixture.

When I used 1 cup of the Dark Karo, a 1/2 cup of white granulated sugar was not enough. I ended up using 1 cup of white sugar to make it sweet enough.

Again, Great-Aunt Nodie’s recipe calls for 1/2 cup of sugar. She did not specify which type of sugar: white, light brown, or dark brown.

Mama says that when a recipe states only sugar, it’s usually safe to assume they mean white granulated sugar like table sugar. She says normally if the recipe requires light brown or dark brown sugar, it is stated along with whether it should be “packed” or not.

Of course, I tested both.

By doing this I learned that pies made with brown sugar take longer to bake ~ about 10 to 15 minutes longer for the filling to set. Mama thinks it’s because of the extra water content or moisture that brown sugar has which white sugar doesn’t, or simply the fact I needed to use more sugar to make it sweet enough.

So while following the recipe instructions, it said to bake the pies about 35 minutes. But like I stated earlier, whenever I changed the recipe and used 1 cup of sugar, the pies were runny when I took them out at 35 minutes.

I remember they definitely wiggled & sloshed somewhat when I took them out of the oven.

Mama said she has heard of people “thickening” their pies with several tablespoons of flour or cornmeal, but was concerned that it would probably change the taste of the pie.

So, I just made another pie and just baked it longer. It took about 45 minutes for the pie to setup & not wiggle when I took it out of the oven. (That’s a total of 6 pies & counting.)

You will want to use a pie shield to prevent the crust from burning. I found that the pie top was also on the verge of burning the longer it baked. Around 30 minutes, you may want to tent/cover the pie with aluminum foil to prevent scorched tops (which happened to me).

Great-Aunt Nodie’s recipe only called for 1 cup of chopped pecans. During our testing, we decided the pies were a little skimpy on nuts, so we added 1/2 cup more, for a total of 1 1/2 cups of nuts.

You can always add more nuts to the top as garnish, but we found it hard to cut through the whole nuts on top. If I were to garnish my pies in the future, I would make sure to leave “knife spaces” between the nuts for cutting & serving.

It became apparent when trying different sugars and syrups, what the original recipe used: 1/2 cup white sugar & 1 cup Light Karo syrup, based upon the bake time listed. This was my mom’s favorite and could simply be because she grew up with this recipe. This pie was good & plenty sweet with only 1/2 cup of white sugar. After tasting all the pies, mom said it was sweet and the flavor of the pecans & butter comes through not just the filling like the other pies.

My dad’s favorite pie used 1 cup Light Karo syrup & 1 cup light brown sugar. Mom said she liked that one as well, but tasted the sauce/filling more than the nuts. She said she wouldn’t complain if someone served it to her…she’d still gladly eat it. (This is the pie I re-made since the filling wasn’t set the first time I made it). This is my favorite sauce – I couldn’t stop tasting it while stirring it on the stovetop.

I made another pie using 1 cup Dark Karo syrup. It ended up needing 1 cup white granulated sugar, since 1/2 cup was simply not sweet enough. Both my parents liked the filling, but thought it was either too sweet, or liked other pies better.

The last combo I tried was 1 cup Dark Karo syrup with 1 cup light brown sugar. Again, both my parents liked the taste of other pies better.

Well, I had to do the research on this one. Mama said that growing up the pie was usually made the day it was served and allowed to cool during dinner, and that there usually wasn’t a storage issue since there were never any leftovers. For our family, we end up leaving it our on the counter for a couple of hours and then before bed covering it with foil before putting in the fridge.

Mom said she successfully froze half a pie a few months ago. She said she put an extra layer of aluminum foil over the entire pie & tin and stuck it in the freezer. Several weeks later, she said she took it out at lunch and left it out on the counter (still covered in foil), and by the time dinner was over, the pie was thawed and she was able to cut and serve it just fine. She didn’t even need to re-heat it, and remembers that the filling hadn’t separated.

This is also one of those pies that gets better once it sits and the flavor goes through it. So if you can make it a day ahead and not eat it, you’ll be rewarded the next with it’s wonderful buttery flavor.

Most websites say that pecan pies should be wrapped & refrigerated for up to 4 days, but the pie must be completely cool before being placed in the refrigerator. Usually 2 hours is recommended.

Apparently, you can keep a baked pecan pie safely in the freezer for 1 month. Although I did find one website that said 4 months. Most websites recommend placing the frozen pies in the refrigerator overnight to thaw for the following day.

According to the FDA, pecan pies should only stay out of the refrigerator for up to 2 hours, or they become a risk for bacterial growth. (Mama says according to the FDA she should be dead by now – ya know she’s one of those kids who also drank out of the garden hose too) 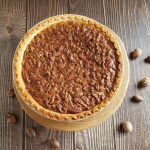 This pie taste better with age, since the flavor goes through. Browning the butter on the stovetop first, creates this pie’s wonderful buttery-flavor. Unbaked 9″ pie shell: Based on our research the store-bought pie crusts are much smaller than homemade ceramic & glass pie pans/crusts. Therefore if you do not make your own pie crust, this recipe will need a deep-dish 9-inch pie shell to hold all the filling. Sugar & Karo syrup: If you decide to use Dark Karo syrup you will need 1 cup of either white or brown sugar to make the pie sweet enough. However, you will also need to bake the pie longer for the filling to set ~ about 45 minutes. Baking: You will probably want to use a pie shield so the crust does not burn. If you are cooking the pie longer than 30 minutes, you may also want to “tent” some aluminum foil over the top of the pie to prevent the pie top from scorching/burning. Storage: