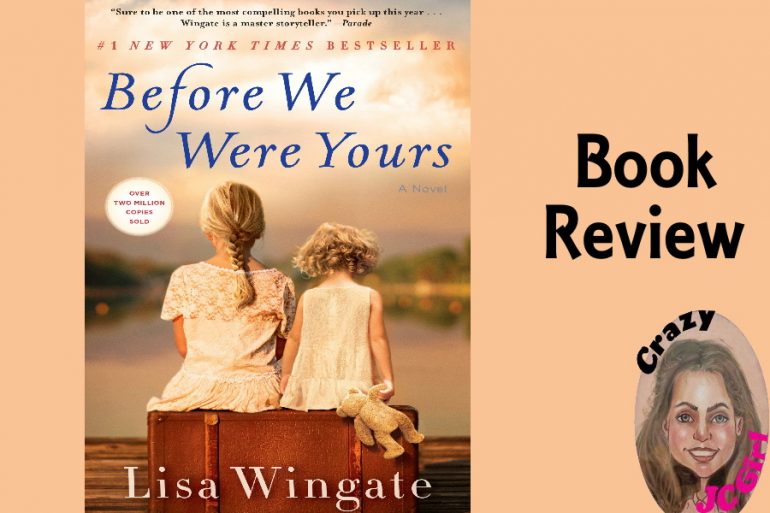 During this past school year, I read Before We Were Yours by Lisa Wingate, and I have never been so entertained yet disgusted at the same time.

This historical fiction book is based upon Georgia Tann and her involvement with the Tennessee Children’s Home Society. The author based her book upon events that actually happened (& probably still do occur), but the names are made up.

In alternating chapters, it’s in the point of view of children who were wrongly kidnapped in the 1930s, and then in the next chapter, we are in modern times with a lawyer who has just discovered the case.

Avery Stafford, a federal prosecutor, has everything she ever wanted – a fiancé, a secure job, a successful family. When visiting a nursing home, she meets May, and something doesn’t feel right. May, who has never met Avery before, immediately recognizes the bracelet she is wearing. Oh, and May happens to steal it right off her arm claiming it’s hers.

In earlier times, river gypsies or people who lived on shanty boats, like Rill Foss and her siblings, were kidnapped by authorities, who claimed that their parents weren’t raising them properly. Once placed into the orphanage, Georgia Tann secretly gives each child up for “adoption” to wealthy parents, who will pay quite a large sum to acquire the “perfect child.” Each child is then renamed, and told to never speak of their past, and be on their best behavior, or they will end up in “the closet.” One of Rill’s siblings, Camellia, who is renamed Iris, adamantly disobeys orders, and is presumably raped and killed.

What is interesting about this book, is that real-life adults have read this book and started the process of trying to find and locate their birth parents and family members. Apparently, hundreds of children were “adopted” out of Tennessee throughout the United States. Some have memories of their original families or the orphanage itself, but some were so young they have no memories of their past lives.

I think this book can be enjoyed, but I highly doubt that this would be enjoyed by a person younger than 9th grade, even as a Read Aloud. It really depends upon the reader’s maturity.

I used this book as literature pick for Language Arts while studying American History in high school.

In fact, I used this book, along with the A Solitary Blue book (by Cynthia Voigt), in a writing assignment comparing biological vs. step/adoptive parents along the theme of nature vs. nurture. Actually we took it a step further and used these books along with The Other Wes Moore book (by Wes Moore) to write another paper on parents & environmental factors and their affects on one’s life and behavior.