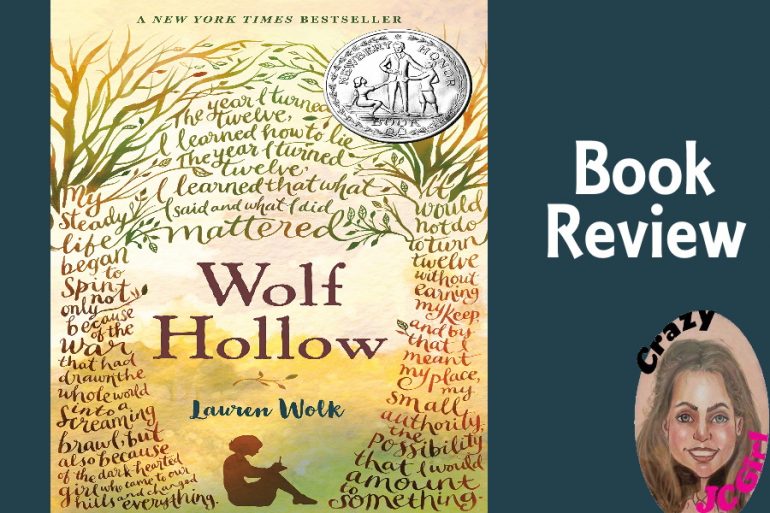 This past school year, I read several good books, like Wolf Hollow by Lauren Wolk, which won the John Newbery Medal in 2017.

From the book jacket: “Growing up in the shadows cast by two world wars, Annabelle has lived a mostly quiet steady life in her small Pennsylvania town. Until the day new student, Betty Glengarry walks into her class. Betty quickly reveals herself to be cruel and manipulative and while her bullying seems isolated at first, things quickly escalate, and reclusive World War I veteran Toby becomes a target of her attacks. While others have always seen Toby’s strangeness Annabelle only knows kindness. Soon, she will need to find the courage to stand as a lone voice of justice as tensions mount.”

“Brilliantly crafted, Wolf Hollow is a haunting tale of America at a crossroads and a time when one girl’s resilience and strength help to illuminate the darkest corners of our history.“

Set in 1943, in the fictional town of Wolf Hollow, Pennsylvania, lives 11-year-old Annabelle McBride with her parents, grandparents, her Aunt Lily, and 2 little brothers.

A lonely World War I veteran named Toby lives in an abandoned smokehouse nearby in the woods. He is always seen carrying 3 guns over his shoulder and seems “troubled,” but her family realizes he’s “harmless.” Sometimes Sarah, Annabelle’s mom, leaves food for him to pick up. After talking to him once, Sarah learns that Toby is interested in photography, so she gives him a camera that she won in a contest years ago.

Shortly thereafter, a 14-year-old bully named Betty Glengarry moves to Wolf Hollow to stay with her grandparents. Betty’s meanness is evident to all the kids, but she singles out Annabelle. Betty always is waiting on the path which Annabelle uses to walk home through the woods. She threatens to hurt Annabelle and her brothers if Annabelle won’t bring her items she deems valuable.

Although nervous about Betty, Annabelle decides to fight this battle without telling her parents. Annabelle doesn’t bring anything for Betty, so the bully continues to harass her. One day, she beats Annabelle with a stick. Another time, Betty breaks a bird’s neck right in front of Annabelle, just to see her reaction. Toby then appears and tells Betty to leave Annabelle alone. Betty later falls into a patch of poison ivy and suffers for days.

After Betty heals and returns to school, she befriends a fellow troublemaker named Andy. The two frequently leave together, even during the middle of the school day. One day during a break from class, Annabelle chats with Mr. Ansel when he drives by in his cart. Her friend Ruth is standing nearby. From the hill above, which is obscured by trees and brush, someone throws a rock. It hits Ruth in the eye, which results in permanent blindness. People assume the rock was meant for Mr. Ansel because he’s German.

After her brother gets a deep cut across the forehead by a sharp wire strung across the path home from school, Annabelle finally tells her parents about Betty’s bullying. When her and her family confront Betty and her grandparents, of course Betty denies everything and accuses Toby, an easy suspect.

Annabelle knows the police intend to question Toby, so she hides him in her family’s barn loft and provides him with food and clothing. She even cuts his hair and beard until he becomes unrecognizable.

Meanwhile, Betty goes missing, and the search for Toby intensifies. Annabelle knows that Toby has been in the barn all along and couldn’t have taken Betty. She decides to help both Toby and the police.

I wont’ give away too much more, but there is no happy ending to this story.

Since this book has gruesome happenings, I would recommend this for 8th grade and older.

I read this book as a literature pick for Language Arts while studying American History in high school.

I used this book along with To Kill a Mockingbird (by Harper Lee) to write a compare/contrast paper for Language Arts.