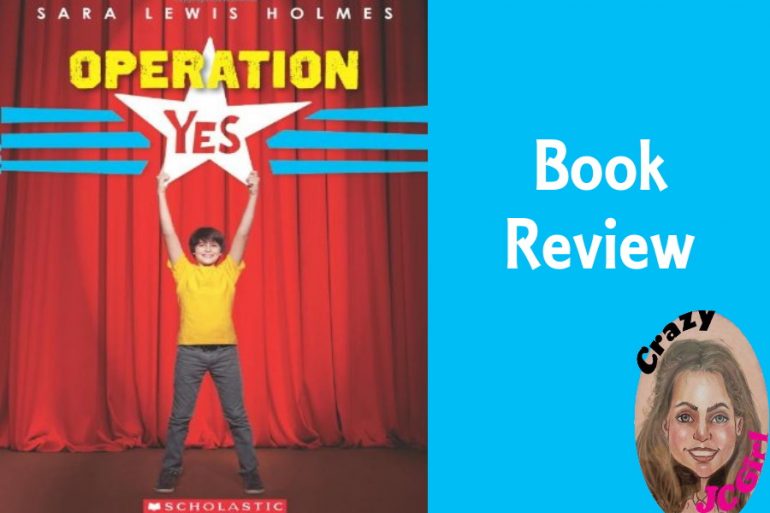 In Operation Yes by Sara Lewis Holmes, a misjudged teacher, Ms. Loupe, helps her 6th grade class learn improvisation and the value of expression. The students, with minds yet-to-be-unlocked, attend an uncared-for school on a fictional Air Force base in North Carolina.

“PLAN A: Bo is going to behave for his new teacher. (His father, an Air Force colonel, says so.) Gari is going to live peacefully with here cousin. (Her mother, an Army nurse, says so.) Miss Loupe is going to teach her class language arts, social studies, math, and science. (What’s supposed to stay secret: the theater lessons – and her tattoo.)

PLAN B: Bo stages a food fight. (His father isn’t pleased.) Gari stages a protest. (The Army isn’t pleased.) And when something happens that none of them could plan for… they lose Miss Loupe too. And what comes out of that is…

PLAN C: It involves misbehaving (- and working together). Protest, fighting (- and making something amazing). For everyone’s parents. Everyone’s families. It’s a plan so big, so daring, so life-changing, that it can only called: OPERATION YES” – From the back cover

The students include Bo, son of the base commander, and his moody cousin Gari. Gari is now living with Bo’s family (under protest) while her mom is deployed to Iraq.

Living in base housing, enduring frequent moves, and abrupt deployments to far-off wars are just some of the typical problems these military children face. We learn how military families are mutually supportive, dedicated to service, and proud of what they achieve while living under considerable stress.

The kids warm up slowly to Miss Loupe, who teaches them to embrace life’s possibilities through the arts. However, after her brother is reported missing in Afghanistan, she loses her joyful persona. As Bo and his friends plot a way to help their teacher, Gari must choose between joining them or pursuing her own plan to bring her mother back home.

While written for a civilian audience, this engaging story avoids the difficult question of war vs. peace. Instead, this book focuses on how war (& peace) affects the daily lives of American military families.

I’d recommend for 10 years and up.