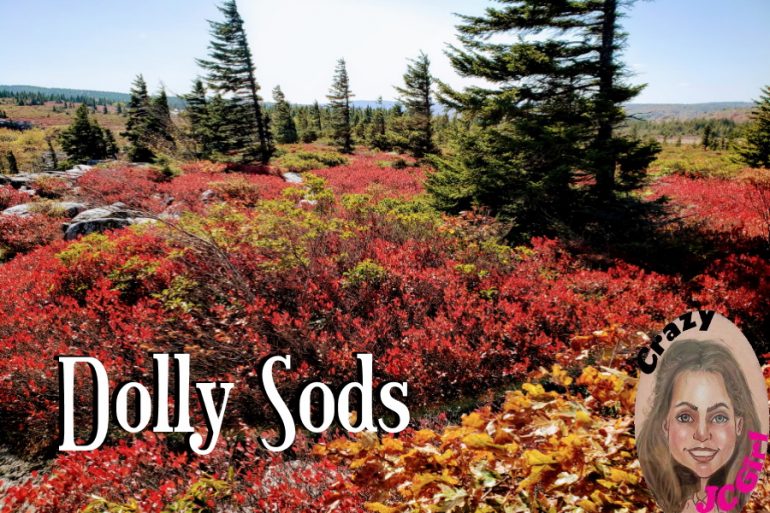 Well actually, we only visited Bear Rocks Preserve located in the Dolly Sods Wilderness area, part of the Monongahela National Forest near Petersburg, WV. And we picked the wrong day for it…

Do you enjoy car trips? With no wi-fi? Yeah. Me neither. I made the mistake of not bringing any books either. Nor snacks!

Oh, then there was the disappearance of our GPS (when someone accidentally closed it on there phone – not naming any names!) and at least a half hour of driving around in circles. AND, there wasn’t any cell phone service so we could just search for it again – we had found a “dead zone.” How did people even get anywhere before cell phones?!

Let me tell you about the wind…I almost died people. The wind almost knocked me over a cliff. And the wind was so loud I could barely hear the person standing right next to me scream.

Needless to say, this wasn’t one of our more successful trips. This one I will need to revisit in the future. Plus, we really didn’t even attempt the hike. But, let me tell you what I did see & learn…

The Dolly Sods Wilderness area lies along the Allegheny Mountains, which are part of the Appalachian Mountain Range. This unique alpine plateau features not only stunted & wind streaked spruce trees, but also heathlands consisting of blueberries, huckleberries, mountain laurels, azaleas, and rhododendrons. At times it reminded me of scenes from some Scottish Highlands movie.

Dolly Sods brings beauty year-round (although travel along Forest Roads 19 and 75 is not allowed from January to April due to gate closures). During the spring, the laurels, azaleas, and rhododendrons are in bloom. Starting mid-summer, the blueberries and huckleberries are ripe for the picking both by humans and the creatures of the wild (picking is allowed for personal use only). From late August through October, many hawks, eagles, and other migratory birds, travel along the Alleghenies south, where you can watch many of them riding “thermals.” From late September to early October, Dolly Sods welcomes the colors of Fall (the pictures on this post were from the first week of October 2020). And winter, brings snow and ice…beautiful, but dangerous.

As you can imagine, being at a higher elevation means that the weather is quite different from down in the valley and can change very rapidly. We made the mistake of visiting on a windy day….windy down in the valley. At the top of the mountain, the wind is MUCH STRONGER. I almost got the wind knocked out of me…by the wind! In fact, the wind gusts were so strong they almost knocked me over (the edge of the cliff). It also doesn’t make for very good pictures when you are holding onto a tree for dear life, either. (We’re thinking we experienced gusts of at least 30-35 mph. That same day, Alexandria, VA was having 20 mph winds with gusts of 30 mph.)

For those who want to play with their geography skills and take out a map…we learned that Dolly Sods lies along the Eastern Continental Divide. Amazingly, water that flows down the east side of these mountains will ultimately end-up in the Chesapeake Bay. Whereas, water that flows to the west, will end-up in the Gulf of Mexico.

This is a fun, family-friendly scenic overlook but NOT for the elderly, wheelchair bound, or those prone to twisted ankles. I would only recommend this for kids who are not scared of heights or who love to scramble/climb up-&-over boulders and rocks.

As you can see, the trail is very rocky. In fact, at the overlook, it’s nothing but rocks! But there’s the fun…if you walk or scramble along the cliff, you can find many interesting & fun places to climb and explore. Although, I probably would not advise to do this hike after it has rained – rocks are slippery when wet.

So mom was freaking out. She kept saying “Watch your step. This looks like snake territory.” We heard one family pass us on their way back and said they had seen a snake…my mom turned back (her worst fear ever). So once we were done with the scenic overlook we headed south towards the plateau. And guess what? Over, far away from the rocky ledge, mom hollered over the wind for all within earshot to hear – “Aaaaaahhh!” She almost step on a 2-foot long bright green snake (that was “not skinny”), that somehow both my father & I had missed stepping on or seeing. She proceeded to fly towards the car. (My dad did go back and look…he confirmed it was a “sizeable” snake…of course non-poisonous.)

Flying was good, since the ground was rather mushy and wet over on the plateau. I definitely wouldn’t wear my nice shoes. I understand from other people that parts of the Bear Rocks Trail (which we didn’t do) was actually flooded and portions were “2-feet deep of mud.”

As stated earlier, we accidentally closed our GPS app on our phone while taking a picture on our way to Dolly Sods. With no cell service, we could not just bring up the GPS directions once again, so we ended up just using our “Spidey Senses” and “Feeling Our Way” towards a small sign for Dolly Sods that someone in the car remembered seeing from a previous trip. We definitely could of used a MAP or even printed out directions to save about 45 minutes.

HINT: Print out the directions before you go!

“From Petersburg follow WV 28/55 south to Jordan Run Road. Turn right and go 1 mile to Forest Road 19. Turn left and follow FR19 six miles to the Dolly Sods Scenic Area. The wilderness is directly ahead of you at the intersection with FR75. Turn right for Wildlife and Fisher Spring trailheads; turn left for Rohrbaugh and Red Creek trailheads.”

“From Canaan Valley: follow WV 32 south to the Laneville Road (WV45). Turn left and go approximately 6 miles to the Red Creek Bridge, where the road changes from pavement to gravel and is now Forest Road 19. Red Creek trailhead is on the left behind the Laneville wildlife management cabin. Continue on FR19 to get to Rohrbaugh trailhead and FR75.“

Expect to travel along bumpy, gravely, and dusty roads. Our entire car was covered in dust by the end of the day. Also, we saw where 2 trucks had accidentally hit one another while passing – they knocked their side-view mirrors off.

Let me first say that Bear Rocks is one of the more popular hikes in Dolly Sods. Thus, parking is interesting. On the left, is a picture of the parking area near the end of the day, when most people had already finished their hikes and left. On the right, a picture of the road 3 days later on Saturday.

We went during the middle-of-the-week when most people are at school and work. You can see there was overflow parking along the side of the road. We saw license plates from West Virginia, Maryland, Virginia, Ohio, New York, and Pennsylvania the day we went.

Once done with your exploration of Dolly Sods, you will probably want to head towards Petersburg, WV for fast food, gas, or lodging. My family headed towards Seneca Rocks which also has lots of B&Bs, but not much in way of fast food (unless you count the gas station snacks as food).

It appears that the Red Creek Campground near Bear Rocks, Red Creek, & Blackbird Knob Trails had only 10 campsites which were full. I understand they stay full. (Not sure if you need prior registrations or not.) Backwoods camping is allowed past 300 feet of the forest roads (streams and trails) using a backpacker-type stoves only – no open campfires allowed! Bring your drinking water or be prepared to “treat” your wild water. Always Leave No Trace … Pack it In & Pack it Out!

I would recommend you pre-plan your trip. Also pick additional trails and/or places you’d like to visit. Check out the following website for the latest alerts & info before leaving:

Did I mention that we went on a really windy day? Well let me tell you what we saw on our trip up to Dolly Sods. Windmills!!

These bad boys are huge! The arms/propellers on these things are almost as long their base. All the ridges (about 4-6) had these windmills spaced evenly along them. We must of counted at least 40 of them, but lost count as we traveled along.

Here’s the thing…you would have thought these would have been cranking and spinning so fast due to the high winds that day…but they weren’t!? We figured out they must have a lot of torque on them to move so slowly with the amount of wind that day.

My parents said it was unusual to see a “windmill farm” here on the east coast. When we lived out west, they said they saw “windmill farms” all the time, but haven’t seen many windmills in the east, except for the old-fashioned kind.

As stated above, we’re thinking we experienced gusts of at least 30-35 mph up on top of Dolly Sods. That same day, Alexandria, VA was having 20 mph winds with gusts of 30 mph.

I can’t really say that I hated this hike or not. We definitely need to attempt this one again. I do believe most people will enjoy this recreation area just because it “feels” different from most other up-&-down mountain hikes with switchbacks & peaks. My pictures do not do this area justice – this is a place you need to see it, in order to experience it.