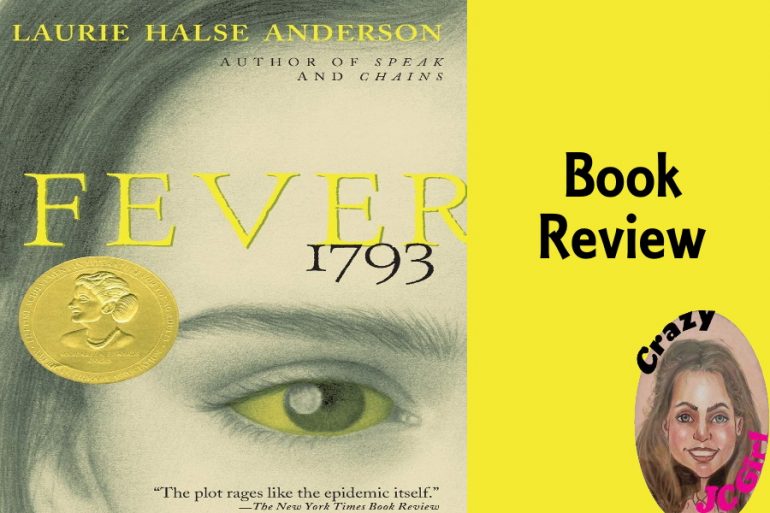 Although mainly a tragedy, Fever 1793 is a historical fiction book that caused me to roll-with-laughter. Set in, well umm…1793, author Laurie Halse Anderson informs the reader about the Yellow Fever outbreak in Philadelphia. The reader is entertained by a quick-witted grandfather, a feisty cook, young teens awkwardly falling-in-love, and a moody tabby cat named Silas. All this adds spice to this award-winning book while handling a serious topic.

Matilda Cook, our 16-year-old heroine, known as Mattie and her family are struggling to create a dowry…a large one, because they know of no acceptable type of gentleman who will marry her without one. That is, besides Nathaniel, an apprentice painter, who works a few blocks from the coffeehouse who is already smitten with Mattie. Although he is the wind-beneath-her-wings, Nathaniel doesn’t fit her mother’s or grandfather’s idea of “husband material.”

From the back cover- “During the summer of 1793, Mattie Cook lives above the family coffee shop with her widowed mother and grandfather. Mattie spends her days avoiding chores and making plans to turn the family business into the finest Philadelphia has ever seen. But then the fever breaks out.“

“Disease sweeps the streets, destroying everything in its path and turning Mattie’s world upside down. At her feverish mother’s insistence, Mattie flees the city with her grandfather. But she soon discovers that the sickness is everywhere, and Mattie must learn quickly how to survive in a city turned frantic with disease.”

While George Washington was president, and the capital of the country was located in Philadelphia, Yellow Fever sent the wealthy and all the state and national government officials running out to the countryside for safety. Only the mayor, Matthew Clarkson, along with a handful of people remained in the city. Such as the local printer, who stays behind in order to help the mayor send out and post notifications. A few mansions are commandeered as make-shift hospitals as well as orphanages. The Free African Society is also shown offering assistance to the sick, and is gladly received by all.

This book addresses the difference of opinions in medical treatments and those doctors involved (Rush & Girard). Stereotypes (slaves are immune), lack of information about transmission (miasma – bad air) and quarantine approaches (throw the sick out of the house/window) are all covered.

It covers how life during a crisis changes, not only daily routines, but how we view basic resources like food, shelter, and clothing. Not only having to switch into survival mode, this book also details how people can surprise you, with either the best or the worst of character traits.

This book, of course, talks about death and mass graves in the potter’s field. It addresses how it seems disrespectful how the dead are simply carted and thrown into the grave. Mattie takes a stand at one point.

As is usually the case, older people are dying, leaving the young children behind. How the city took care of orphans is worked into this book. A sobering, harsh look at reality without the time or energy to approach children with comfort is displayed by those taking care of the orphans.

Recommended for 6th grade & up. Tween & teen girls will probably like this book more than boys.