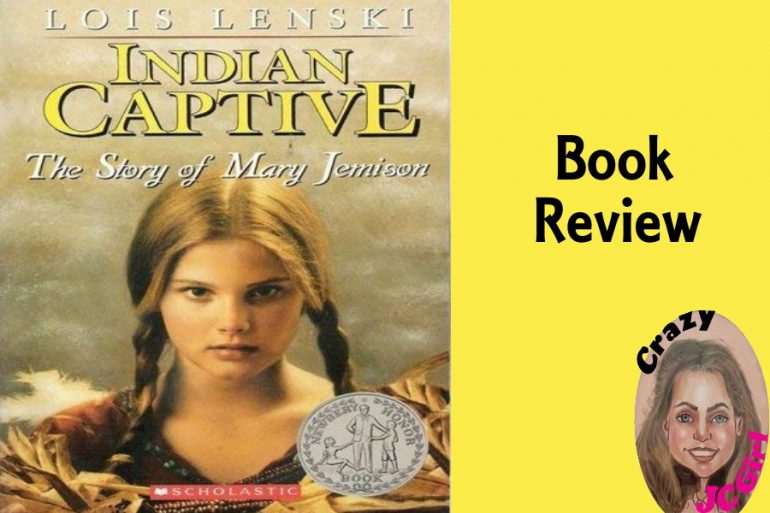 Based on a true story, the Indian Captive: The Story of Mary Jemison by Lois Lenski is a children’s biography about Mary Jemison and her life with the Seneca Indians. This Newbery Honor Book focuses on her captivity and her struggles to adhere to their different lifestyle and customs.

In Mary’s colonial home, things are flat-out boring. Chores, sewing, and meddling siblings interrupt her day. She takes for granted the peace in her home. When “savages” raid her home and take the Jemison family captive, things will never be the same.

However, she isn’t alone – Davy Wheelock, a neighbor kid, along with Nicholas Porter, another confused captive are with her. Along the way, Josiah is also “adopted” into the Seneca tribe. Although Josiah is determined to escape, he stays to keep Mary company. It isn’t too long before Josiah successfully escapes in the spring, leaving Mary behind.

Mary, also known as Molly, tries numerous times to escape – all coming to nothing but a scolding from the Indians. When Mary is seen by white people, some helpful and some not, she is torn between a boring life with white people, and an adventurous and happy life with the Indians.

From the back cover – “Twelve-year-old Mary Jemison took her peaceful days on her family‘s farm in eastern Pennsylvania for granted. But on a spring day in 1758, something happened that changed her life forever. A band of warriors invaded the house and took the Jemison family captive. Mary was separated from her parents and brothers and sister. She traveled with the Indians to southern Ohio and later to a Seneca village on the Genesee River in what is now western New York.“

“Mary’s new life was not easy. She missed her family terribly, and she was unaccustomed to Seneca ways. Several times she even tried to run away. But the Indians were kind to her and taught her many things about the earth, its plants, and its creatures. She became a sister to animals and to all growing things. Then Mary was finally given the chance to return to the world of white men. But she had also become a sister to the Indians. How could she leave them?“

“Based on a true story, here is the unforgettable tale of the legendary ‘White Woman of the Genesee.'”

Sprinkled with a hint of romance, this book follows Mary through her scary capture, her yearning to be back with her own family, to an understanding that life looks different and you can never return to your past. Based upon her first years in captivity, 1758-1760, this book takes place during the French & Indian War where the Iroquois are helping foreign powers.

Throughout the book, the Iroquois lifestyle is intertwined into the storyline, where the reader has been taught without even realizing it. We learn how babies and children are raised, expectations of girls vs. boys, women vs. men, and how emotions must be controlled. Throughout the seasons, the jobs or chores are changing from tending the “Three Sisters” to storytelling in the winter. Baby frames, burden straps, clay cooking pots, bows & arrows, beading, porcupine quills, deerskin clothing, and bark houses are all incorporated into the story as well.

The author has noted in the forward that she has “revised” Mary’s story to fit her storyline:

“My story deals only with Mary Jemison’s childhood – not her later life. Certain liberties have, of necessity, been taken with Mary’s own story, to adapt it to fictional use for modern young people, but he essential facts remain true to Mary’s actual experiences. The chief change made has been a telescoping of events in point of time. Certain events which happened later have been moved forward to take place during the first two years of her captivity, before her early marriage….A few details from other captivity stories have been incorporated, to give a better-rounded picture.”

I would recommend this book for 5th grade & up. We learn that Mary’s family is murdered & scalped. When Josiah is “adopted” into the tribe, he must run between men with knives, axes, etc. Even with all this nastiness, I still believe that a 10-year-old could handle this book, especially if used as a Read Aloud.

I used this book as a literature pick for Language Arts while I was studying American History in high school.