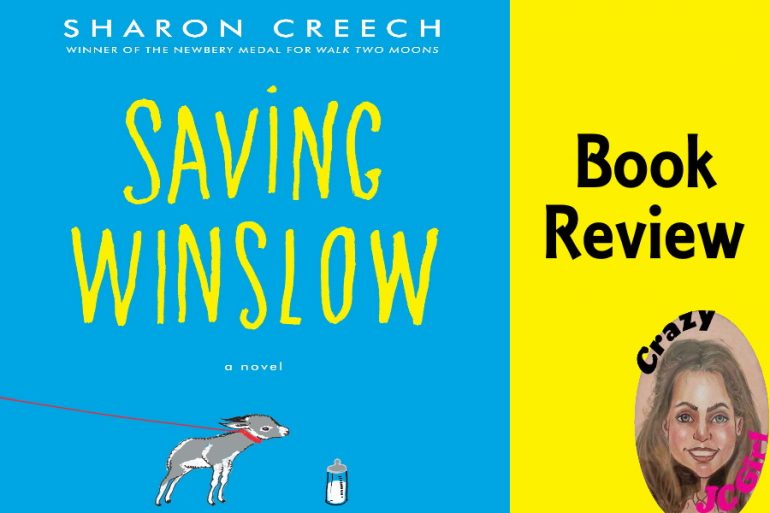 Centered around a weak, newborn donkey, and a shy 10-year-old named Louie, Saving Winslow is about friendship and learning to depend upon one another. At it’s core, the book is about coping with loss and the will to not only survive but to live.

From book jacket – “Louie doesn’t have the best luck when it comes to nurturing small creatures – not even lightning bugs, worms, or goldfish. So when his father brings home a sickly, newborn mini donkey, he’s determined to save him. He names him Winslow. Taking care of him helps Louie feel closer to his brother, Gus, who is far, far away in the army.”

“Everyone worries that Winslow won’t survive, especially Louie’s quirky new friend, Nora. But as Louie’s bond with Winslow grows, surprising events prove that this fragile donkey – and Louie – are stronger than anyone could have imagined.”

In 49 short chapters, we see Winslow become stronger and Louie become braver. Nora, the unique, crazy, and stand-offish neighbor girl from down the street, becomes another central character, who is also dealing with her own issues of grief and loss from a baby sibling. We see how all three become friends and learn from each about how to survive and cope with death and it’s resulting grief.

This book also hits upon military life, with Louie’s older brother sending home letters while enlisted. Louie misses his brother and has several flash-backs, which help describe how his life and home are now “empty.” He also worries about his brother’s safety.

To add to the story, the neighbor has complained about the “noise” of the donkey, so city officials become involved. It doesn’t help matters, that the same neighbor also has a “noisy” crying baby of her own. I won’t give away the story, but tensions finally rise until something dramatic happens.

The book jacket recommends this for ages 8-12. I believe anyone would enjoy this book. However, I wonder if younger children would pick up on the inferences from the characters behavior. Thus, I would recommend for 5th grade & up as an Independent Reader. This would be a great book for a reluctant reader due to the shorter chapters.

This would also be a great Read-Aloud book for the entire family; especially since an adult can address some of the scarier topics like death.