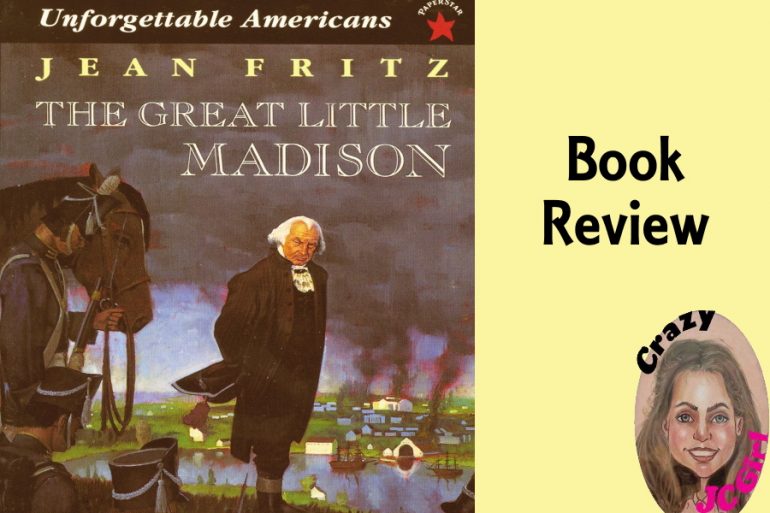 This year, I am studying American history. While some presidents are greatly acclaimed for having large and boisterous personalities, others are not known for their vocal range but for what they accomplish. Such was the case with James Madison.

While having a stature of only 5’4″ and possessing such a quiet voice that it forced everyone to lean forward in order to hear him, James Madison’s constant rants about how our nation should be founded were pivotal in forming our new country. However, despite the debacles of “who has the larger voice,” shy James Madison is commonly known as the “Father of the Constitution,” and for writing the Bill of Rights. Madison helped ensure “freedom of speech,” “freedom of the press,” as well as “religious freedom.”

From the back cover – “In 1814 the United States of America seemed about to unravel. The country was in another war with England and this time the Americans were losing. In New England there were threats of secession. Washington, D.C., had been captured by British troops, and they had burnt down the president’s mansion. The only person standing up to these enormous problems was a man once described as ‘no bigger than half a piece of soap,’ James Madison.“

“But physical size was nothing next to the intelligence of James Madison, one of America’s founding fathers. Before the Revolution, he had been among the first Americans to oppose the British. At the Federal Constitutional Convention, he had earned the title ‘master builder of the Constitution.’ With his good friend Thomas Jefferson, he had helped the United States to become ‘the land of the free’ when other Americans thought the idea was crazy and impossible.”

“Yet now he was the president of the United States, and facing his greatest challenge ever. Would this ‘little Madison,’ with his small voice and scant appearance, be able to save the country?”

Jean Fritz writes in a humorous and easy-to-understand way to help younger readers. Although this book doesn’t go in-depth, it provides a wonderful introduction about James Madison for those who really don’t know anything about the 4th President of the United States. Madison served 2 terms from 1809-1817.

“If men were angels, no government would be necessary.” – James Madison

Madison’s childhood, college days, bachelorhood, and engagements are also mentioned. The author spends quite a bit of time helping the reader become acquainted with James’ personal life and what kind of person he was. It helps portray how one person can really make a difference in this world even if he/she appears to be limited in any way.

Madison’s friendship with Thomas Jefferson is established, as well as his encounters with Patrick Henry, John Jay, Aaron Burr, and Alexander Hamilton. The Articles of Confederation, the Constitutional Convention, the Federalist Papers, the Revolutionary War, the Louisiana Purchase, the War of 1812, and Madison’s presidency are all topics that are covered in this book. Emphasized is Madison’s work on fixing relations with Britain before and after the War of 1812.

“Knowledge will forever govern ignorance, and a people who mean to be their own governors, must arm themselves with the power knowledge gives.” – James Madison

Although a biography about James Madison, this book also goes into a great detail about Dolly Payne Todd Madison, considered the 1st “First Lady” of our country. She herself is a remarkable individual. Dolly established and defined a lot of the customs, traditional roles and duties that are now expected of “First Ladies.”

I would say this 160-page book is suited for 6th graders and up. High School kids will appreciate the easy read, but younger readers may feel overwhelmed at times.