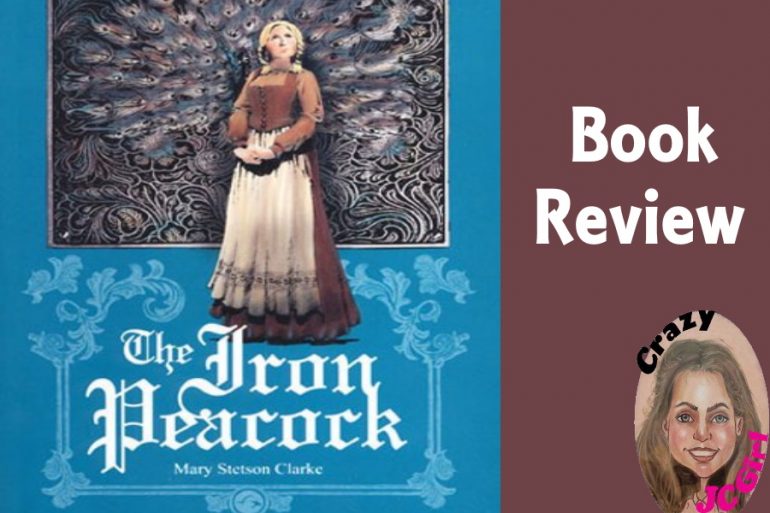 Set in 1650, The Iron Peacock by Mary Stetson Clarke is a rags-to-riches sob story where 16-year-old Joanna Sprague’s father dies while traveling to the New World (aka America) from their homeland in Hammersmith, England.

She is poorly treated after her father dies, so she has no one to take pity on her. All except Ross McCrae, a Scottish indentured servant, who works as a lumber jack to make massive amounts of coal for the ironworks. At Mr. Sprague’s funeral, Ross is heard playing bagpipes, and he is cursed by the captain.

In America, Joanna becomes an indentured servant for John Gifford, the Iron Master, under whom Ross also works. Joanna is supposed to take care of Debby, the Gifford’s daughter, and help the cook. Later, she is taught to weave on a huge floor loom, from which she makes stuff to help buy her freedom from servitude.

The local Indian tribe and it’s relationship with the Puritan colony and religion is strained. Joanna’s make a friend with an Indian servant girl, Yaweta, who works for the Puritan preacher’s family.

“Joanna Sprague’s happy life in England is shattered on a bleak and stormy day in 1650 when her father is buried at sea. Now, at the age of 16, penniless and alone, Joanna faces life as a kitchen maid in the household of the Iron Master, John Gifford. The secret Puritan way of life at Hammersmith provided her no comfort. Through hard work and perseverance can she become whole when she feels most unsure?” – From back cover

I would say this book is fit for middle school. This book covers the first Ironworks in America, and it’s magical mystery of how iron is created – from logs used to create coal to the glowing smelter.

You can actually visit the Saugus Ironworks which the book is based upon. Located in Saugus, Massachusetts here is the National Park Foundation’s link with info: https://www.nationalparks.org/explore-parks/saugus-iron-works-national-historic-site

You can do an online-tour of the Saugus Ironworks & its surrounding area using the National Park Service’s website: https://www.nps.gov/sair/learn/photosmultimedia/multimedia.htm