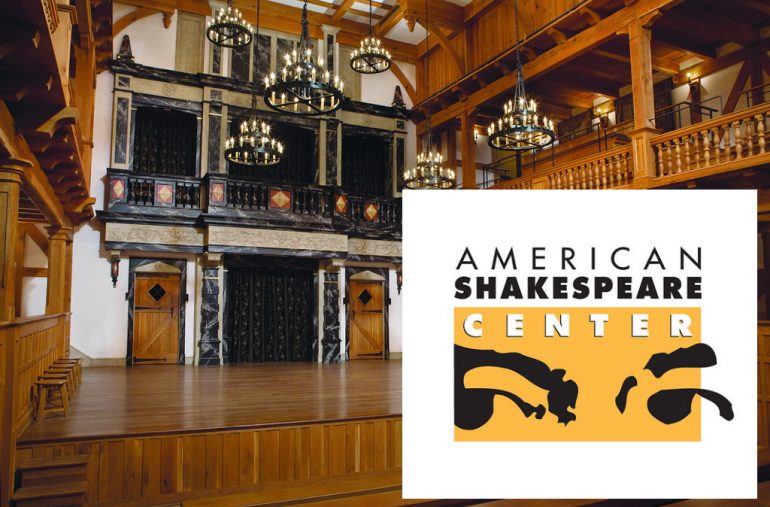 Located in Stauton, Virginia, the American Shakespeare Center is an exact replica of the Globe Theater in England…that is on the inside of the building, not the outside.

My mom and I went to this theatre on one of their Homeschool Days back in September. The homeschoolers, who took up quite a bit of space, were the first to be seated center floor…right in front of the stage. My mom and I happened to be dead center on the front row. What I did not realize at the beginning was that the actors got up close and personal with the crowd – jumping off the stage and running through the aisles. Whew!

We saw “A Midsummer Night’s Dream,” which had me laughing right from the beginning. It is one of Shakespeare’s comedies and this group definitely used their unique talents & personalities. In fact, my mom and I were talking and we can’t picture anyone else playing these roles now. It’s kind of like Carol Burnett in the movie “Annie“…. you simply can’t picture anyone else playing that part after watching her.

Well, let me tell you. These guys (& gals!) are TALENTED! The actors played instruments while waiting for the auditorium to fill. I saw 3 different people play the stand-up bass alone….they just handed it off to one another between songs. I gotta say, with their awesome voices, I’m wondering if some of these folks should be singers instead of actors. During one of the songs, the singer looked directly at my mom & said she was “Hot!” She laughed saying “You Know It” (all the while turning beet red from embarrassment…or it could have been another one of her Hot Flashes).

Above is a picture of the cast’s pre-show performance. We saw their 2019/20 National Tour cast. Each and every one of the actors was great – not a weak one in the bunch. (Of course, this could be because of hours & hours of practice!) They are (alphabetically): Alexis Baigue, Andrea Bellamore, Sophia Beratta, Madeline Calais, Topher Embrey, Kenn Hopkings, Jr., Sara Linares, Michael Moret, Andrews Tung, Mia Wurgaft, and Adam Zarowski.

The first picture on the left is of Puck, played by Maddie Calais. This chick is TAL-EN-TED! I think she can sing and play anything! She played at least 3 different instruments during our performance alone. Puck, of course, is a sprite/fairy/other-worldy-being & she lived it up! She runs around, jumping off stage, and she even set almost all of her lines to different genres of music. Again, Talented! Every scene, I was looking for her. You could say she was the star of the show! Until….

Bottom shows up! You know that Shakespeare wrote this part to be flamboyant – but no one will ever be able to top Topher Embrey’s performance! He fulfills the lime-light-seeking wanna-be AcT-ToR role to a “T.” In fact, after the performance, he fully admitted in the Q&A session to always wanting to be the center of attention. Thus, the role is perfect for him. In fact, he had a death scene “to die for” (pun intended). My mom overheard one of the theater workers saying he hasn’t died the same way twice. He definitely “works off the crowd.”

In fact, they all do – work off the crowd – that is. That is how Shakespeare wrote his plays back in the day…hoping for crowd participation. True to form – this company does the same: handing off props to the audience, looking (or asking) the crowd for help, etc.

Pictured above is Titiana & Oberon, the fairy queen & king who force love among the mortals in the play. Played by Andrea Bellamore and Adam Zarowski, they exuded mischievous sport while trying to one-up each other. They both played duel parts, which were well-chosen. Andrea played both Titania & Hippolyta. Adam played both Oberon & Theseus. In fact, half the cast played duel roles – just like in Shakespeare’s day.

I gotta say, Adam worried us to death though. During parts of the play, he hung around “overseeing” what the mortals were doing by laying/sitting on the balcony tier up in the sky. I thought any moment he was going to fall and we were going to witness him break his neck (at least we’d find out if fairy kings can really fly!)

Later in the play, Demetrius & Lysander (Michael Moret & Andrew Tung respectively) made our hearts-go-a-twitter. Woo-Wee. I won’t give any spoilers, but my mom & I were quite surprised (& thrilled!), all the while wondering where in the world this performance was going.

In fact, my mom laughed so much, she literally had tears. We both really enjoyed this play and can’t wait to see another.

Even if you can’t attend a Homeschool Day, (where they also serve lunch from the Stonewall Jackson Hotel next door, followed by an excellent class/workshop after), you need to make a point of trying to attend a play. They offer performances in the evenings, as well as during the day on the weekends. You won’t regret it!