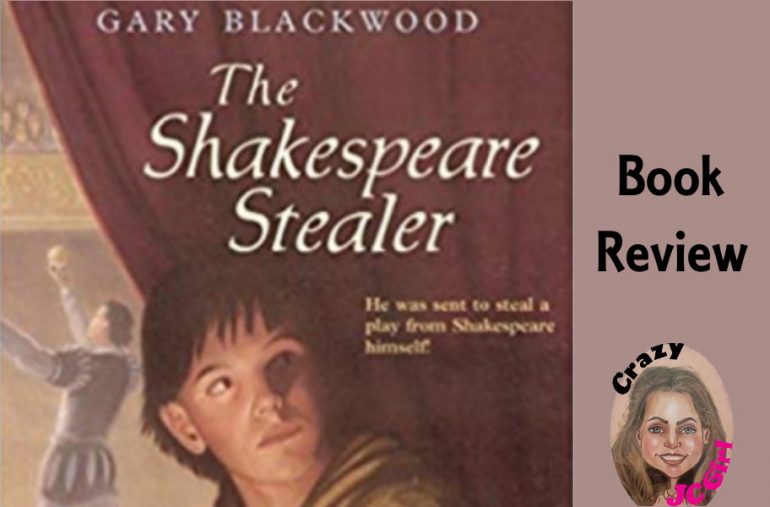 One of my most recent school Read-Alouds was a book called The Shakespeare Stealer by Gary Blackwood. I would say this book is suited for 3rd-graders and up. It is set in the late Elizabethan era. Now as a warning, there is violence and fighting terms, none of which terms I remember.

This book is about how a 14-year-old orphan, Widge, who tries to find his place among robbers and then the theater. Widge is asked by his master to steal the only copy of Hamlet script. To get close enough to steal it, Widge must go undercover as an actor.

“Steal Shakespeare’s play HAMLET…or else. That’s the order from his fearsome master. And Widge – a poor orphan with the rare ability to write a unique coded shorthand – has no choice but to follow orders. So Widge works his way into the Globe Theatre, where Shakespeare’s troupe rehearses and performs. The players take him in and treat him as one of their own. Afraid to disappoint his master, but unwilling to betray his new friends, Widge is torn. Will he secretly copy down the lines? Until he decides, he must play the part of his life.” – From the back cover.

At first, Widge is cautious around the other actors and has no interest in becoming an actor himself. But, as time goes on, he begins to learn the theater terms, make new friends, and forgets about his shady assignment. While running errands for the theater manager, Widge discovers he is being followed by the man who wants him to steal the play. The intrigue continues as everyone’s true identities are revealed.

Take a step back in time and follow Widge as he learns to care about other people and morals – doing what is right, instead of what is easy. Although my mother read this book aloud to me, I enjoyed the story and the character interactions. It truly became a page-turner near the end of the book. I would recommend this to other homeschool families who are currently studying Shakespeare or the Elizabethan era.

This post may contain affiliate links. You can read my full affiliate disclosure here.