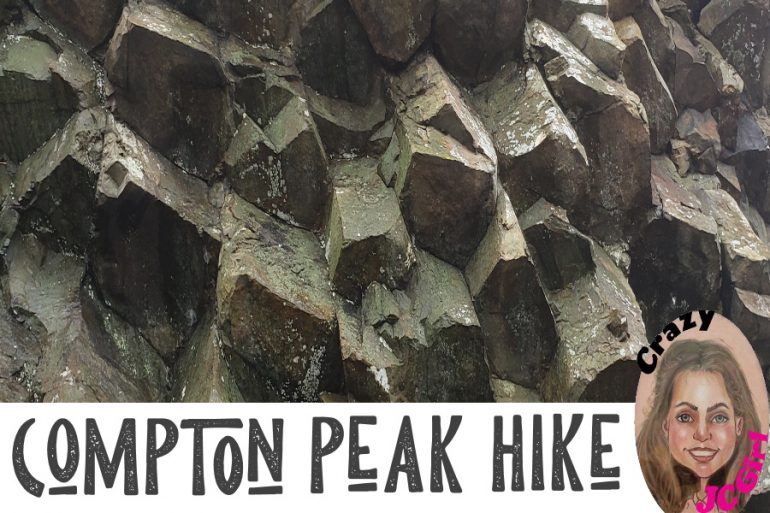 The Compton Peak Hike is a short hike in the Northern section of the Shenandoah National Park in Virginia. There is a parking lot between milepost 10 and 11, and it will be on the right hand side if you are travelling north.

The trail is a fairly easy 2.4 mile round trip hike with a very unique geologic feature at the end. You begin by hiking south for about 1 mile until you get to a “T” in the trail. You will want to turn left onto the Compton Peak East Trail. Along the way you will see many large and small boulders made of greenstone. All the rocks in this area were formed from lava flows. The large rocks are broken apart little by little by the power of ice expanding in cracks.

Although bear and deer are common in this park, we saw none the day we hiked. It had just rained the day before and most of the trail was pretty soggy. Towards the end there was so much water that the last 200 yards or so were very difficult. And if it had been very cold the frozen water on the trail would’ve made that last part of the hike dangerous.

The big treat of the hike is seeing the rock formation at the end, that is called columnar jointing. You will know it when you see it. It looks like rock that was put through a giant play-dough machine. My dad, who has hiked many, many miles in this part says it is one of the most interesting geologic features he has seen in the park. The sign at the entrance of the hike said that the rocks were originally black-colored basalt, but eventually metamorphosed into the greenstone. The lava oozed up out of the earth and between cracks, and as the lava cooled, it shrank into six-sided shapes.

Here is some more info from Oregon State University on Columnar Jointing.

We spent about 20 minutes looking at the rocks. My dad says he wants to come back soon. It was a wet and cold day, and so it was not very crowded. We only saw about five other people on the whole hike. Most of the walk was near the top of the mountain, so my dad said we had a cell phone signal most of the time. Make sure your phone is charged because you will want to take many pictures.

Front Royal is a short drive 10 miles north, and you will find many fast food restaurants, as well as a variety of hotels.

I would recommend this hike for anyone. But not if you use a wheelchair. Also, it is better to go on a warm and sunny day than a cold and wet day. Take plenty of water, keep your pets on a leash, and check for ticks when you get back. Be sure someone knows where you are, and when to expect your return.